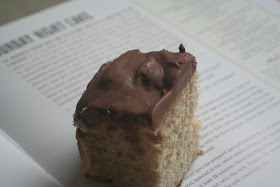 This cake is called Sunday Night Cake because it is something that you can just throw together for an informal Sunday night gathering.  Nothing fancy and no great hassel.  When I first read the description of the cake and the frosting, I thought it would be like Dorie's Cinnamon Squares, a cinnamon cake with a chocolate frosting.  However, Dorie's cake has a lot more cinnamon punch and a richer chocolate frosting.  This cake is only faintly cinnamon and the flavor of the frosting is a more mild chocolate.  The Baked boys called this frosting a pudding and although I have never made a pudding like this, I can see what they meant.  I don't think I would want to eat it with a spoon, but together with the cake it was really good.  Don't skip the step of putting the frosted cake in the fridge.  My frosting was kind of grainy and strange tasting, but once I put it in the fridge, it was smooth and tasted really good.

I enjoyed this cake, especially in its simplicity.  The cake was tender and moist, with a good, warm flavor with a hint of cinnamon and the frosting balanced it nicely with a hit of chocolate.  My husband (the non-chocolate eater) enjoyed the cake without the frosting too.  One note...I didn't have the right size pan, so I made it in a slightly smaller pan and cooked it a little longer and it was totally fine.

Head over to Baked Sunday Mornings to see what everyone else has done and to get the recipe.

Update: I have learned that I misread the frosting recipe and I used bittersweet chocolate instead of unsweetened. If worked fine and the frosting was great after a stint in the fridge.
Rebecca at 12:00 AM
Share