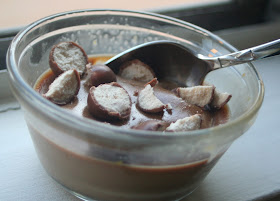 Well, I have kind of fallen down on my Baked Sunday Mornings participation.  Things have been a little crazy around here and the idea of making a super complicated recipe hasn't be that appealing.  However, when I saw this recipe, I knew I had to make it.  I love Whoppers, milk chocolate, malt and pudding, so it seemed like this recipe had everything.  To top it off, it was super easy.  It was calling my name.
I wish I could say I was in love with these, since they seemed so promising.  However, mine came out way too salty and it overwhelmed the delicate flavor of the milk chocolate (public service announcement -- you have to use really good milk chocolate, not just a Hershey bar.  I used Scharffen Berger).  It seems that the Baked boys like things much saltier than I do, since this has happened before.  I hope to try them again and cut the salt a bunch.
The other issue I had was totally my fault, in that I took them out of the oven too early.  After 25 minutes they were still pretty jiggly, but I thought they might set in the fridge.  Turns out that was not too be.  They weren't totally watery, but they did not have that custardy texture I was looking for.  I haven't given up hope though, and will be trying these again one day.
Check over at Baked Sunday Mornings for the recipe and to see what everyone else did.
Rebecca at 12:00 AM
Share